Where there once was nothing, God created.

“And God said, “Let there be light,” and there was light. God saw that the light was good, and He separated the light from the darkness.” Genesis 1:3-4

“God called the dry ground “land” and the gathered waters He called “seas”. And God saw that it was good.” Genesis 1:10

“The land produced vegetation; seed-bearing plants and trees on the land that bear fruit with seed in it, according to their various kinds. And God saw that it was good.” Genesis 1:11-12

“So God created the great creatures of the sea and every living thing with which the water teem and that moves about in it, according to their kinds, and every winged bird according to its kind. And God saw that it was good.” Genesis 1:21

“Then God said, “Let us make mankind in our image, in our likeness, so that they may rule over the fish in the sea and the birds in the sky, over the livestock and all the wild animals, and over all the creatures that move along the ground.” So God created mankind in his own image, in the image of God he created them; male and female he created them.” Genesis 1:26-27

When God put Adam and Eve in the garden, they got to run around naked and they didn’t even care! They were perfect and they knew they were enough.

Satan enters the scene and he convinces Eve that she is not enough. He tells her that if she eats of the forbidden fruit, then she will be enough.

There it is, folks – the very first lie.

Once Eve believed the lie, she took action to reflect it. Instead of trusting God that she was enough, she tried to earn it.

After she and Adam ate the apple, they went and covered themselves up and hid from God.

Why all of a sudden were they embarrassed about their bodies?

Because Satan didn’t just bring in the thought of not being enough; along with it came shame and unworthiness.

Those were all just thoughts, though. God hadn’t told them any of those things.

What we tell ourselves is what we believe. Our bodies and our brains believe what we say to it.

Here’s a perfect example – I want you to imagine that you are holding a lemon. Picture yourself rolling it on the counter top, making it nice and juicy. See yourself peeling it and smell that spray of citrus that is filling the air. Now, in your mind, take a big ole bite into that juicy lemon!

OMG!!! What is your brain telling your mouth right now?! How much did your mouth just salivate?!

And look, you haven’t done anything but tell yourself that you were biting into a lemon.

Can you see how every time we tell ourselves we are not enough – not good enough, not smart enough, not important enough – our body will respond to that thought?

Let’s go back to what God saw (#truth) when He finished creating His masterpieces – He looked at what He created and saw that it was good and to God, good is enough.

Yes, yes you are! 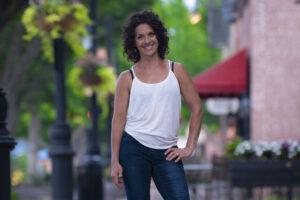